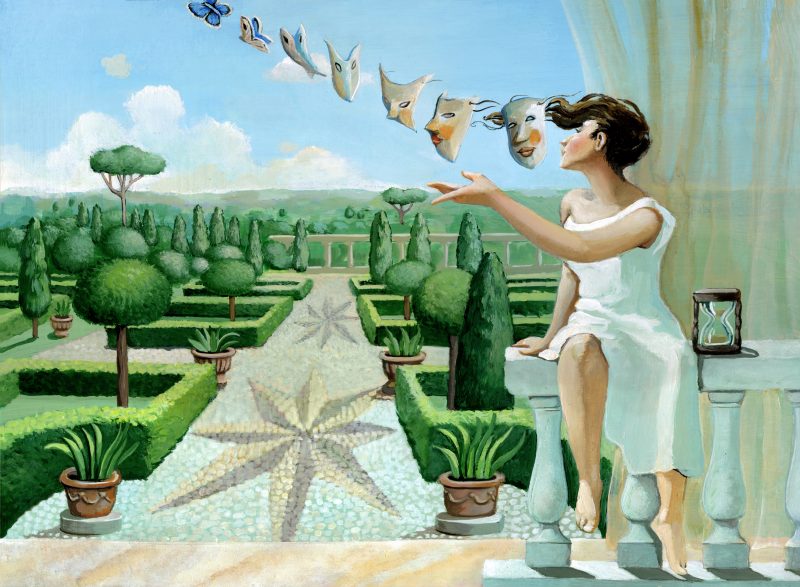 Recently, I read the book Belonging by Toko-pa Turner. I think I turned to it because I wasn’t feeling a sense of belonging in my own life, and sometimes like books do, it exerted a kind of magical pull on me. In it, she talked about so many things that I am strongly attracted to, including working with dreams and archetypes. Specifically, she talked about the Orphan archetype. As I read, I thought about how much I resonate with it both as an HSP and just as a person, even though I have had both my parents in my life.

Another thing mentioned in the book really struck me. Toko-pa talked about how as a child, she was repeatedly told that she was not good enough as she was. She talked too much. She was over-dramatic. She was needy for attention. This startled me because that’s kind of the opposite of the things I was shamed for as a child. I was told that I was too quiet. I was too timid. I needed to toughen up. The label of “shy” was plastered across my little self, and it took me many long years to take it off of me.

I went to an All-Girl’s Convent school till around 16. Looking back, I see what a great school it was. We had loads of extra-curricular activities – dramatics, elocution, debates. You name it. We had it. But there wasn’t a lot that I took part in. In one of our official house “socials,” where we “blue-house girls” met to get to know each other, including everyone from the fifth to the tenth grade, I remember sitting on the side of that big school assembly hall, dying to join in the dance party. I loved to dance, but all through these various events, I never managed to stop being shy and gather my nerve to do it.

Year after year, I sat in that hall, off on the side, thinking that this was going to be the year. I would dazzle everyone with how wonderfully I danced. Only, I could never gather courage.

It was only in my 20s that I finally took classes and trained in the classical dance that I had hankered after learning as that shy little child. It was only then that I could get up and do this thing that I loved so much in front of other people, even performing in front of audiences. But I always felt a nibbling regret that ate me up. I had been such a wussy, such a coward. I had not followed what I loved when I should have. Earlier. When it mattered.

But in that self-flogging dialogue, I forgot that little child who had always felt the one on the outside, always looking in, who didn’t fit, who didn’t belong.

When I read Toko-pa’s story of her own childhood, I thought about what belonging really means.

Toko-pa was shamed for being herself, for talking a lot, for being too much. I was shamed for traits that were the opposite. But in both cases, the seeds of our unbelonging were sown when we were told you to be who we were not. How can someone not become completely convoluted and confused if all that’s inside them is wrong?

For me, my own journey is unfolding as learning compassion for those parts of myself that are still small, still lonely. They show up in my dreams as outcasts or as small children who don’t know what to do. They don’t know how to protect themselves. They cry and create a ruckus. I have to take care of them. I have to learn somehow to be their caretaker.

When I started learning about what it means to be an HSP and accepting my traits as a biological reality and not as something I could overcome with some show of will-power (like I’d tried so hard to do as a child), my life became a little easier.

Now, I do some things that take care of that unseen, unheard, often shamed part of me that gets overwhelmed easily. When I have to be at a new place that I am unfamiliar with by a certain time, I know that I should drive and check it out beforehand a day or two earlier. That’s all there is to it. I grocery shop at times when there are fewer people. I also keep my pantry stocked with at least a few things that I can throw together and make something with. I know that I get overstimulated by doing things at the last moment and by doing too many things in too short a time. I can create workarounds for these times, for these things.

I am also starting to see that in the bigger things, sometimes, it’s okay to be temporarily overwhelmed. The first few times, if I can stay with that overwhelm and get some support, the overwhelm peters down. Like a child nervous about going to school who starts loving it soon enough, I have to guide the lost parts of my own self.

Taking care of myself has also meant taking my feelings seriously and validating my interests and curiosities. As a teenager, I remember coming across an article on Carl Jung, the great Swiss psychologist who gave us such commonly-talked about psychological concepts such as introvert, extrovert and the complex. At that time, while I was deeply attracted to his work, the negative voices in my heads questioned following such a silly, little interest. There was nothing productive about it. What possible rational reason could I have, the voices in my head screamed?

It was only some years back, in my 30s, that I again came across Jungian psychology. During a period of intense change, my dreams became even more vivid. They seemed to mean something, of that I was sure. So, at long last, I let myself follow my silly attraction, Jungian depth psychology that delves deep into the unconscious and into working with dreams, that bridge between our conscious and unconscious self.

It’s been one the most enriching things I have ever done. In my dreams, I have a found a mirror of what’s happening in my day-to-day life. My dreams strip me right down to my naked emotional self. Something in the unconscious also comments on what I am doing in my day-to-day life. It sometimes offers suggestions. I remember a dream in which a dream character said, Maybe, you are not angry, but actually sad. This was at a time when I felt overtaken by anger in my waking life. Hmm, maybe there was something to that.

Dreams like these offer many suggestions that can help guide us. Something in the unconscious is looking on, telling us our position on the map, how we might approach things differently.

Working with dreams is about coming close to something wondrous, something I don’t know the exact shape and form of, something veiled, something deeply intelligent and creative.

I have had this experience only by finally accepting an essential part of me and my nature. This is what I am interested in. This is who I am.

I have often stumbled forward in this self-acceptance. Maybe, you are way ahead of me. In that case, I hope to meet you somewhere along the path, when I have covered more of the road. Maybe, you are some way behind. I hope you know that I have been where you are, not understanding how to give myself even a smidgen of self-acceptance.

I know you can do it. I know you can accept yourself because once upon a time, I believed, as strongly as you do now, that it just wasn’t possible. It is possible, even if slowly, even if haltingly.

I hope we can meet sometime, and then you can tell me your story.

Posted in Emotional And Mental Health, Personal Development Practices, Rethinking Culture
← Identity Is Just The BeginningPleasure And The Stories We Tell →