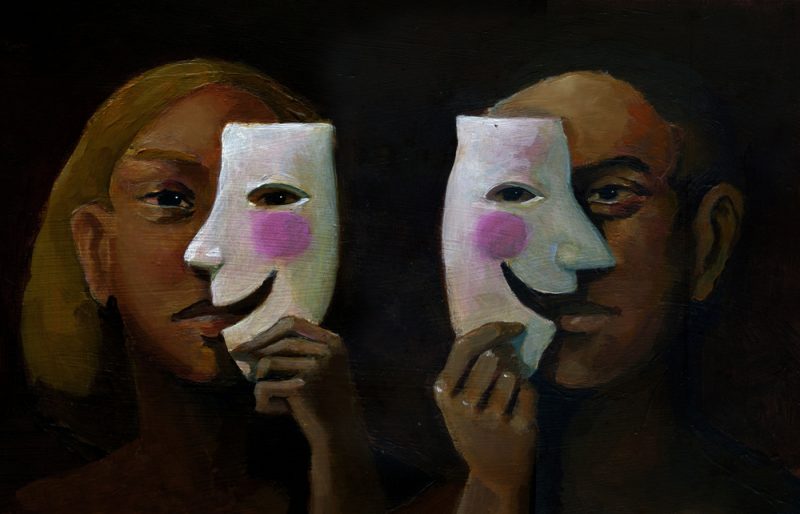 You know that inside joke we have — calling someone a “Vampire” because they drain us of our energy with their negativity and self-absorption?  The nickname might be a bit dramatic, but it’s a pretty fair assessment of what happens in the relationship.

Yet one of the problems with casting someone in the role of a Vampire is that we automatically are casting ourselves as the Victim — because without a victim, the vampire is just some unevolved creature walking around obsessed with themselves.  Of course, it’s difficult to disassociate entirely from them, especially when they are part of our family; but I find there is some hypocrisy in identifying someone as a vampire and then getting upset with them when they bite.

The other bit of hypocrisy we sensitives have is that while we are name-calling and finger-pointing (albeit usually in the privacy of our online sensitive circles), we, too, are out there sinking our proverbial teeth into people — only instead of ‘Vampire’, we wear the cape of ‘Savior’ or ‘Hero’.  We usually don’t realize that we’re doing it, but even when we do, we somehow convince ourselves that it’s noble, or at least selfless.

You may think I’m being unreasonably harsh… like I’m not Team Sensitive.  I am Team Sensitive!  I’m actually Team Everybody, but that’s an article for another day.  Right now, I’m blowing the whistle on this behavior of hypocrisy because not only have I seen it frequently on social media and with my clients, but I’ve seen it in my own mirror  — and the sooner we become aware of it and take responsibility for it, the faster we’ll be able to recognize the hypocrisy, change it, and evolve in our sensitivity. So here’s the nutshell version of some steps you can take to shift these relationship patterns.

First, to help stop playing the part of the victim, stop spreading your victim story (online or otherwise) about the vampires in your life and how they are draining you. I also found it helpful to stop replaying the incidents in my head. Instead, I swapped those thoughts for prayers, asking the universe to help shift the relationship. And if someone else asked me to retell a vampire tale (usually people who like to fan the flames of drama), I would make a benign statement and then repeat it every time they probed.  Like no matter what they asked, I would answer: “I’m handling it,” or “I’m praying about it.” Eventually, they get tired of asking. But it takes time to change, so be patient with the other person; and it takes practice to stand up for your boundaries, so be patient with yourself, too.

Second, as for the vampires themselves, I found that the same method can also work here.  For example, if someone was droning on about how black the sky is and how fast it’s falling, I would gently say, “I have confidence you’ll get through this,” or “I’m going to pray for you about that.”  And I’d keep repeating the same thing every few minutes. Sometimes, however, it’s more effective to come right out with the truth: “I’m going to have to interrupt you, because I’m finding this conversation uncomfortable or _______ (fill in the blank).  Can we please talk about something else?” My family responded very well to that approach – and it only took one year to shift our relationship to healthier patterns! I told you… be patient.

Giving Up The Savior Role

In the case of sensitives playing Savior or Hero, let’s first take a moment to acknowledge that we are incredible problem solvers.  That’s one reason why people come to us. Our keen sensory perception, acute emotional processing and innate intuition are all stored in a databank of wisdom that we can tap into at near-lightning speed.  (As an aside, I was once engaged to a man who would always ask me why I decided to do something in a particular way. It was exasperating! How could I possibly spell out for him the complexity of the Sensitive Algorithm when I barely understood it myself?  I finally just started saying, “If I have to explain, you wouldn’t understand.”)

But despite the remarkable gift we’ve been given, we are violating one of the divine laws when we try and solve someone else’s problems, because part of their journey is to learn from their mistakes and grow as a human being.  They can’t do that if we keep swooping in to rescue them or solve their problems for them. When we do, we’re stunting their growth! So whenever you feel the urge to jump in and offer a solution to someone’s problem or take matters into your own hands, PAUSE.

PRAY or send positive thoughts to the person.  With some practice, doing this often feels just as good or better than getting directly involved in other people’s problems (partly because the act of sending another person positive thoughts raises one’s emotional state).

Practicing this ‘Pause-Ask-Pray’ method will shift your energy. Over time, you will not only find it easier to respect other people’s boundaries, you will also find that other people respect yours more, too.

Jeannette Folan is an Integrative Health Coach for Sensitives who encourages her clients to take a ‘Spiritually Academic’ approach to healing and self-development. She is the author of the novel “Diary of a Teenage Empath – The Awakening”, as well as other digital tools and activity books for children and teens. In 2019, she co-launched the first-ever accredited HSP Certification Training Program for mental health professionals with her mentor, Dr. Wendy Nickerson. Connect with Jeannette at Empath Diary and Nickerson Institute.

View all posts by Jeannette Folan →