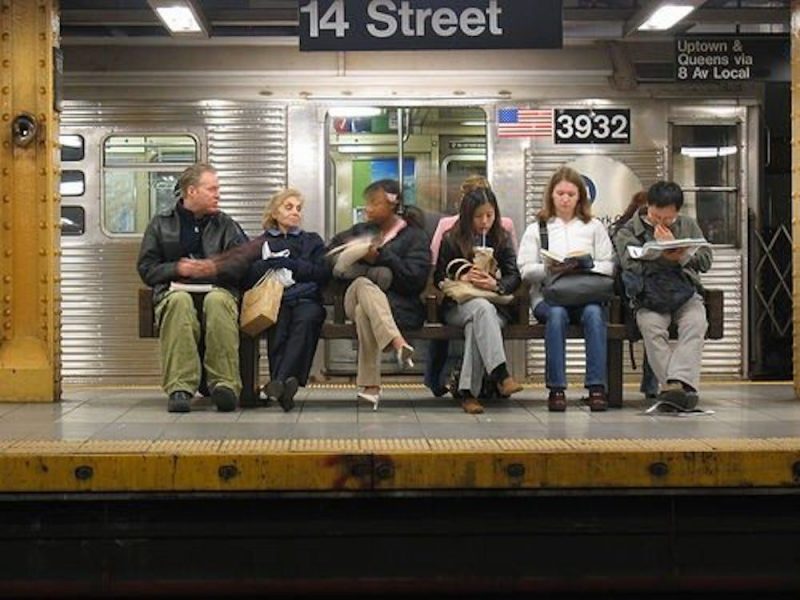 I am an urban HSP.  I sometimes think I must be truly nuts to be living in New York City, a place that seems like the very embodiment of the word “overstimulation.”

Crowded, loud, bright and always on, it can be a nightmare for the senses of an urban HSP.

If you let it.

I’ve lived here for nearly 15 years now, and I’ve found ways to make it work. (I have a bit of a dream writing job, and this is one of the only places I can really do it, which is why I don’t leave, in case you’re wondering. Also, nearly everyone I love is here, which adds weight to the case for sticking around when you are an urban HSP.)

Attitude For An Urban HSP

I think the lessons I’ve learned as an urban HSP can be helpful for all, particularly those who might be living in other, smaller urban environments. I think you have to start by just seeing city life slightly differently than many. Here, I think there’s often a default attitude of, “Only in New York! Gotta love it!” when, for example, you’re on a crowded train at 9 a.m. and all of a sudden there’s a mariachi band furiously playing, mere inches away from your face.

You actually don’t have to love it. (I suspect very few people love it, but I applaud their generally optimistic ability to pretend that they do.)

So here are a few of the survival tips I’ve come up with to make being an NYC urban HSP work for me.

1) Get good headphones, and don’t be afraid to use them.
I’ve always been shocked that so many people are willing to put up with the crappy white headphones that come with an Apple product. They make my ears sore after only a few minutes of listening, and they don’t fit well enough to filter out ambient noise (nor do they stop everyone around you from hearing your music, one of my big pet peeves about public transportation these days: if you’re not wearing headphones yourself, you are more often than not subjected to the contents of someone else’s).

No, I’m talking about getting some of those little rubbery ear buds, or, if you’re loaded, a pair of Bose noise cancelling headphones (they’re on my wish list). A little of your own curated music can radically change a walk through a chaotic city street, a subway car filled with yammering people and blaring conductor announcements, or a store where four overly cheerful salespeople come up to you within the span of a minute and say, “How ARE you today? Can I help you find anything?” Just point sheepishly to your headphones, as if they are surgically implanted in your head and totally beyond your control, and move away.

2) If you’ve got a smartphone, get a white noise app.
Music is good in many situations, but I find that when I need to really concentrate on reading or writing something, it’s too distracting. My white noise app is the best thing about my iPhone by far. Mine lets me create my own mixes of soothing sounds: beach waves crashing and light rain! Tree frogs and oscillating fan! Or just plain old white noise. Actually, brown noise, which is softer than white noise. Check it out, you’ll see what I mean. Any of these will instantly reduce my HSP stress by half. It’s also genius for hotel rooms while traveling (more on this in my upcoming sleep tips post).

3) Make subway rides work for you. As Elaine Aron might put it, use your boundaries. Don’t worry about everyone else’s feelings so much. My instinct is generally to try to make other people feel good, so I’m not all that comfortable saying no or shutting things down even when I really need a break from human beings (which is pretty often).

But I’ve found that in order to stay sane, you have to just power through that instinct and be a little protective of yourself. For example: when riding on the train, someone sits down next to me eating an egg sandwich. She seems perfectly nice otherwise and part of me doesn’t want her to feel like a leper if I get up and move. But you know what? An egg sandwich smells disgusting, and it’s ruining the precious half-hour of down time I have in the morning. So I’m gone.

Ditto someone who’s having a loud, laughing cell phone conversation next to me. Or twitching just slightly oddly in a way that suggests they might be a bit off. Or wearing pungent perfume. Just get up and move. You’ll feel so much better when you do.

Similarly, when I’m leaving work and someone tries to catch me and take the train with me, I generally come up with a reason to split off (“I have to make a call first,” or “I have to run an errand”). I find that when my subway ride gets diverted into chitchat or small talk, I tend to reach my destination feeling depleted and annoyed, which reduces my ability to be present for whatever my next activity was. So I just find non-mean ways of getting out of the shared subway ride.

It’s best for everyone.

The Challenge Of Smelly Air

4) Get an air filter
One of my least favorite things about New York is the smells. And I’m not even talking about the stereotypical pee and garbage aromas, which tend, in my experience, to be a bit overstated. No, it’s the cooking smells that really do me in.

Apartment building living just inevitably comes with having to share the air with other people who like different food than you, and if you’re an HSP, those odors can feel like a punch in the face. Someone down the hall from me must, I think, own a deep fryer, because nearly every night it smells like Popeye’s in the hallway. This is not OK. This smell makes me deeply sad. But I can deal with it, because I have a pretty decent air filter going in my apartment’s entryway. It also just offers some psychological support, knowing I have a little mechanical sentry between me and the olfactory chaos going on outside my door. (In a pinch, I find that a Yankee Candle also works pretty well. Who knew? But it’s nothing compared to an air filter.)

Bottom line, just because you live surrounded by other people doesn’t mean you have to feel violated by their ill-advised culinary choices.

Create Your Own Lifestyle As An Urban HSP

5) Get a dog
In a way, this might seem odd advice, because a dog does come with its own set of stressors: they cost money, they require lots of attention, they may wake you up barking at absolutely nothing in the middle of the night. But if you get a good one, they can also offer a brilliantly convenient excuse for getting out of things and living a lower-key life than you might otherwise be expected to do as a city-dweller.

Everyone in your office going out for happy hour, and you’re sort of expected to go, even though the thought of being stuck in a noisy bar making small talk makes you want to bang your head against a wall? Don’t sweat it, you have to go home and walk the dog. Sorry! Additionally, your dog will ensure that you must go on multiple rambles around the neighborhood daily, which is a practice that’s highly beneficial for soothing the HSP’s system. Which brings me to my next tip.

6) Live near a park
It doesn’t have to be Central Park (or your city’s version of Central Park). But if you have someplace you can get to reasonably easily where you can be among trees instead of human beings, that’s going to increase your quality of life a whole lot. (As well as your dog’s.) Go regularly. Go every day. Take deep breaths and always know, when you’re in the midst of the urban circus, that this will always be here waiting for you. Don’t live near a park? Make it a habit to walk through one on your way to work, if you can. Get off the train a few stops early and incorporate a park walk into your commute.

7) Get plants
Plants! It’s like having a mini park in your apartment.

8) When all else fails, Xanax.
Just kidding. (Not really.)

Posted in Personal Development, Stress
← 7 Paths to Reducing Sensitivity And Overwhelm For HSPsIs Criticism Getting You Down? 7 Ways To Minimize Its Harm →

Sara is an arts writer living in New York City. She calls herself an "in the closet HSP" because she hasn't yet introduced the concept to most of her family and friends. They just think she is very, very particular. She may get a twitter handle one of these days. But first she has to go for a walk in the park.

View all posts by Sara →